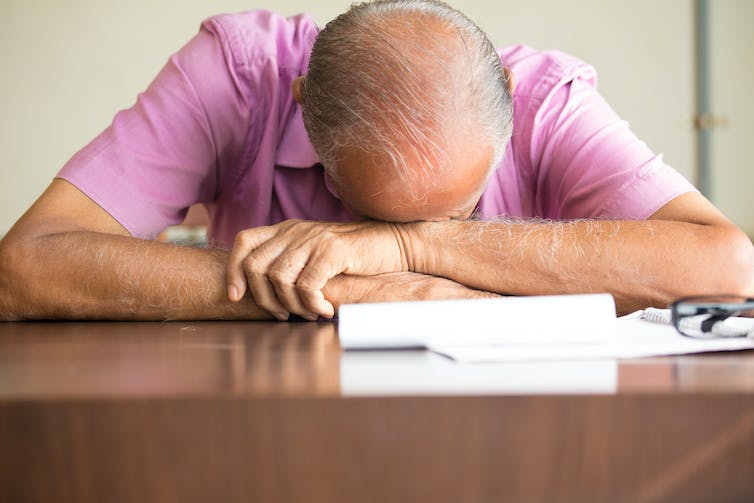 A key reason for deciding to retire has to do with getting tired at and through work, how that tiredness affects partners and families.
www.shutterstock.com
Andreas Cebulla, University of Adelaide

In the past decade a 30-year trend to earlier retirement has been reversed. In OECD countries the average age at which people retire has risen by about one to two years. In Australia the average age has risen from 64 to 65.6 for men, and from 61.8 to 64.2 for women.

For the Australian government, though, this isn’t enough.

In a speech last night, Treasurer Josh Frydenberg spoke of the pressure put on Australia’s health, aged care and pension systems by an ageing population.

Over the next four decades the number of Australians working and paying income tax for every person over the age of 65 would fall from 4.5 to 2.7, he said. The proportion of people over 65 in the workforce would therefore have to grow substantially.

The government needs people to keep working and paying income tax to offset spending on age pensions, health care and the like.

Its most obvious policy stick is to raise the eligibility age for the pension, which is now 66 but will be 67 in 2023. Raising it further, however, is something the government has rejected as not on the cards. Instead Frydenberg is talking about more training for older workers to keep their skills relevant.

Read more:
How we could make the retirement system more sustainable


But my research with Mikkel Barslund, Jürgen Bauknecht, Nathan Hudson-Sharp, Lucy Stokes and David Wilkinson suggests this is a very small and unappealing carrot.

Our findings suggest there’s a limit to retirement ages rising organically. Because there comes a point where work, especially full-time work, just isn’t something most people want to – or indeed can – do.

The reason has to do with getting tired at and through work, how that tiredness affects partners and families, and the limit to which workplaces have shown themselves capable of accommodating the needs and preferences of older workers.

This is something that can only be addressed by dramatically reconfiguring work options.

The limits of job satisfaction

These conclusions are based on two studies into the experiences of older workers.

These studies have been based on data gleaned from two large European surveys, the Survey of Health, Ageing and Retirement in Europe (SHARE) and the European Social Survey (ESS). SHARE is a database of information on the health, socio-economic status and family networks of about 140,000 individuals aged 50 or older in 28 countries. ESS measures the attitudes, beliefs and behaviour of people in more than 30 nations. The demographics of these surveys means the results are relevant to the Australian population.

The results found people happy in their jobs retired later than those who were less satisfied with their job and its working conditions.

That’s perhaps not a surprising finding. But what is interesting is that our modelling showed that, if every mature age workers’ job satisfaction was raised to its highest level, the effect on retirement would still be small.

It would add, on average, about three months to current retirement ages.

The effect was stronger for women and those with tertiary qualifications. If working conditions made them more satisfied with their job, they would spend an extra 9 to 12 months in work before retiring.


Job satisfaction is only part of the story, though. The second study, using data from ESS, highlights the obstacle of increasing tiredness to longer working lives. This is so because tiredness after work can adversely affect relationships with partners and families.

Interestingly, the significant factor in the perceptions of partner or family is not the number of hours worked but ability to determine a daily work schedule.

Those with greater influence over their working day were much less likely to find their partner or family “fed up” with their working beyond the time they could have retired. This greater control did not eliminate tiredness, but it appeared to help non-retirees better balance work with home life.

Our studies do point to a few tangible things that can be done do to make working in later life more bearable.

These are things, of course, that might improve job satisfaction for any worker, regardless of age. But they are within the control of the employer, not the government.

So perhaps what Josh Frydenberg and the federal government now need to talk about is not just a narrow focus on education or training to help older Australians remain in the workforce for longer, but how to encourage better working environments for everyone, regardless of age, gender or occupation.

This article has been amended to remove a statement that Josh Frydenberg called Australia’s ageing population an “economic time bomb” in his speech. This statement was reported by multiple media organisations given advance briefings, but Frydenberg did not end up using the phrase in the actual speech.

This article is republished from The Conversation under a Creative Commons license. Read the original article.